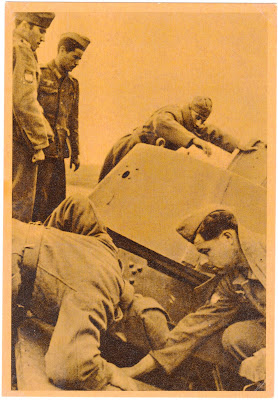 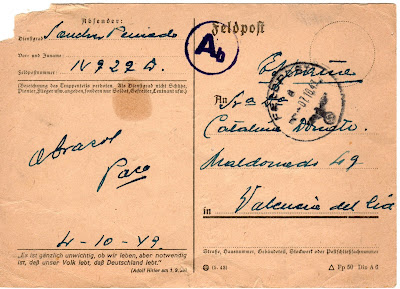 GERMAN WEHRMACHT FELDPOST CARD
FELDPOST NR. 14929, INFANTRY REGIMENT 263, SPANISH
SPAIN'S VOLUNTEER "BLUE DIVISION"
POSTMARKED OCT. 7, 1943, LENINGRAD AREA AND THEIR WITHDRAWAL FROM THE EASTERN FRONT
The Blue Division (Spanish: "División Azul", German: "Blaue Division"), or 250. Infanterie-Division in the German Army, was a unit of Spanish volunteers that served in the German Army on the Eastern Front of the Second World War.
The 250. Infanterie-Division was formed in Spain during the last week of June 1941, immediately after the German attack on the Soviet Union. The unit was an offical Spanish sponsored formation created to partially repay the debt owed Germany for its vitally important assistance during the Spanish Civil War during 1936-1939. It was formed with Spanish volunteers from across Spain who flocked en masse to serve in the unit, originally named simply the Spanish Division of Volunteers, or more properly, Division Espanola de Voluntarios (DEV). The division was exclusively a foreign volunteer unit, designed for service within the German Wehrmacht, but to consist soley of Spaniards and to be led soley by Spanish officers.
Read more »
Posted by Jim Jim Jr. at 12:08 PM No comments: