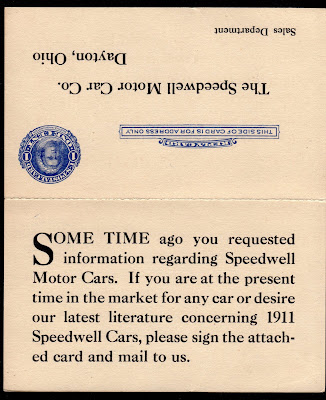 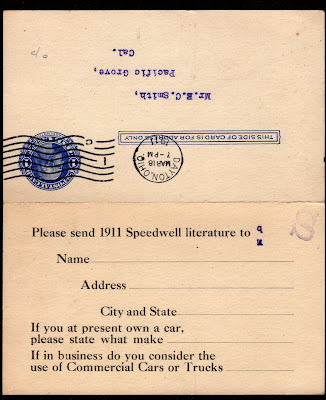 UNITED STATES - POSTAL REPLY CARD, UY5
"SPEEDWELL MOTOR CAR COMPANY"
Dayton, OH to Pacific Grove, CA, CDS dated March 18, 1911
Here's an interesting example of an unsevered preprinted Paid Reply Postal Card, Scott UY5, from the Speedwell Motor Car Company in 1911.  I purchased this item many years ago from a small stamp shop in Carmel, California, which is not far from Pacific Grove, the original destination of this postal card.  I have not seen another example of this reply card since then, so it may be quite scarce, especially since the Speedwell Motor Car Company closed only a few years later.
The Speedwell Motor Car Company was an early United States automobile manufacturing company producing "brass-era" automobiles from 1907 to 1914.  The company's factory rented space for the Wright Company from February to November 1910 while the Wright Company built its own factory building in west Dayton.

1911 Speedwell Model F Special
In 1911, Speedwell built a closed two-door, dubbed a sedan, which was the first recorded use of the term. (ref. Wikipedia)
Posted by Jim Jim Jr. at 12:40 AM No comments: