PHILIPPINE AMERICAN WAR - Company A, 38th Volunteer US Infantry on 23 May 1900, Batangas, Philippines

It's Memorial Day weekend here in the United States.  Memorial Day is a U.S. Federal holiday observed on the last Monday of May (May 31 in 2010).  First enacted to honor Union soldiers of the American Civil War (it is celebrated near the day of reunification after the Civil War), it was expanded after World War I.  Today, it commemorates U.S. men and women who died while in military service.

Therefore, this Memorial Day weekend, I will share a postal history item from my collection to help us remember those that made the ultimate sacrifice in the line of service to our Country... 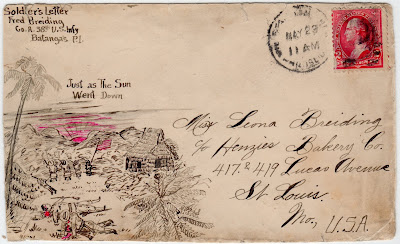 PHILIPPINE AMERICAN WAR COVER
Cover sent by Fred Breiding of
Company A, 38th Volunteer US Infantry on 23 May 1900,
during guerilla fighting and "pacification" in the Batangas region.
Extraordinary soldier's drawing on this cover!
By the time this cover was mailed during the Philippine American War, the army of the Philippine Republic was no longer a regular fighting force.  Faced with the superior strength of U.S. forces, on Nov. 12, 1899 at a meeting of the council of war in Bayambang, Pangasinan, General Emilio Aguinaldo dissolved the regular army.  It was reformed into guerrilla units that would carry on the war unconventionally, relying on ambush, concealment, and the avoidance of set-piece battles.

This method of warfare was successful in the past against the Spanish, and initially it seemed to be successful against the Americans.  As American casualties grew, it seemed as if the Filipinos would fight the Americans to a stalemate and force them to withdraw.  This was even considered by President McKinley at the beginning of this phase of the war.

Unfortunately, such tactics brought on the full wrath of the U.S. military onto the Filipino guerrilla and Filipino civilian population alike.  This period of the Philippine American War became marked by atrocities and a level of barbarity, committed by both sides, previously unseen in this conflict.
In May 1900, General Elwell Stephen Otis was replaced by Brigadier General Arthur MacArthur, Jr. as military governor, and William Howard Taft arrived as civil governor (Governor-General) of the Philippines.   On Dec. 20, 1900, Brig. Gen. MacArthur, Jr., declared in an official proclamation that since guerrilla warfare was contrary to "the customs and usages of war," those engaged in it "divest themselves of the character of soldiers, and if captured are not entitled to the privileges of prisoners of war."
Less self-disciplined men found in the proclamation authorization for identifying Filipino fighters as outlaws and dealing with them accordingly.